What the Quran says about Moses and Pharaoh 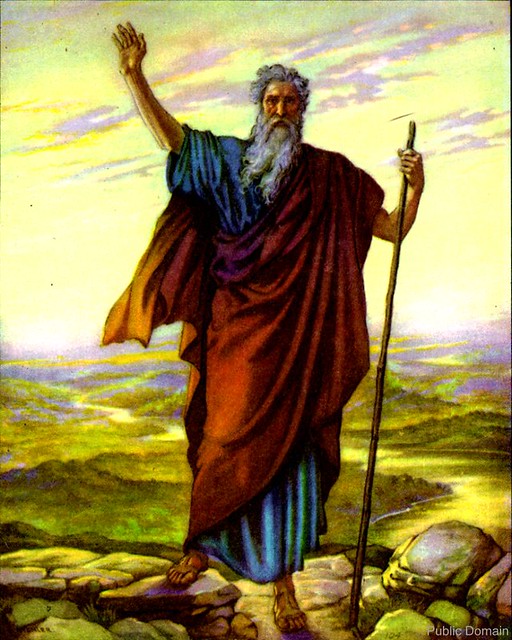 [In Islam, Moses is one of the great messengers of God, along with all the other prophets in the Bible.

The following verses from the Quran tell the story of Moses from birth to the beginning of his mission to Pharaoh when God assigns Aaron to help him. The rest of the story is told in other verses, but this set of verses gives us a taste of how much Judaism is part of the same family of religions as Islam. This is what makes all Jews our sisters and brothers in faith.

The following translations of the Quran are adapted from those made by M. M. Pickthall. His translation is a bit dated, but it still carries a certain charm.]

We narrate unto thee (somewhat) of the story of Moses and Pharaoh with truth, for folk who believe.

Lo! Pharaoh exalted himself in the earth and made its people castes. A tribe among them he oppressed, killing their sons and sparing their women. Lo! he was of those who work corruption.

And to establish them in the earth, and to show Pharaoh and Haman and their hosts that which they feared from them.

And We inspired the mother of Moses, saying: Suckle him and, when thou fearest for him, then cast him into the river and fear not nor grieve. Lo! We shall bring him back unto thee and shall make him (one) of Our messengers.

And the family of Pharaoh took him up, that he might become for them an enemy and a sorrow, Lo! Pharaoh and Haman and their hosts were ever sinning.

And the wife of Pharaoh said: (He will be) a consolation for me and for thee. Kill him not. Peradventure he may be of use to us, or we may choose him for a son. And they perceived not.

And the heart of the mother of Moses became void, and she would have betrayed him if We had not fortified her heart, that she might be of the believers.

And she said unto his sister: Trace him. So she observed him from afar, and they perceived not.

And We had before forbidden foster-mothers for him, so she said: Shall I show you a household who will rear him for you and take care of him?

So We restored him to his mother that she might be comforted and not grieve, and that she might know that the promise of God is true. But most of them know not.

And when he reached his full strength and was ripe, We gave him wisdom and knowledge. Thus do We reward the good.

And he entered the city at a time of carelessness of its folk, and he found therein two men fighting, one of his own caste, and the other of his enemies; and he who was of his caste asked him for help against him who was of his enemies. So Moses struck him with his fist and killed him. He said: This is of the devil’s doing. Lo! he is an enemy, a mere misleader.

He said: My Lord! Lo! I have wronged my soul, so forgive me. Then He forgave him. Lo! He is the Forgiving, the Merciful.

He said: My Lord! Forasmuch as Thou hast favoured me, I will nevermore be a supporter of the guilty.

And morning found him in the city, fearing, vigilant, when behold! he who had appealed to him the day before cried out to him for help. Moses said unto him: Lo! thou art indeed a mere hothead.

And when he would have fallen upon the man who was an enemy unto them both, he said: O Moses! Wouldst thou kill me as thou didst kill a person yesterday. Thou wouldst be nothing but a tyrant in the land, thou wouldst not be of the reformers.

And a man came from the uttermost part of the city, running. He said: O Moses! Lo! the chiefs take counsel against thee to slay thee; therefor escape. Lo! I am of those who give thee good advice.

So he escaped from thence, fearing, vigilant. He said: My Lord! Deliver me from the wrongdoing folk.

And when he turned his face toward Midian, he said: Peradventure my Lord will guide me in the right road.

And when he came unto the water of Midian he found there a whole tribe of men, watering. And he found apart from them two women keeping back (their flocks). He said: What aileth you? The two said: We cannot give (our flocks) to drink till the shepherds return from the water; and our father is a very old man.

So he watered (their flock) for them. Then he turned aside into the shade, and said: My Lord! I am needy of whatever good Thou sendest down for me.

Then there came unto him one of the two women, walking shyly. She said: Lo! my father biddeth thee, that he may reward thee with a payment for that thou didst water (the flock) for us. Then, when he came unto him and told him the (whole) story, he said: Fear not! Thou hast escaped from the wrongdoing folk.

One of the two women said: O my father! Hire him! For the best (man) that thou canst hire in the strong, the trustworthy.

He said: Lo! I fain would marry thee to one of these two daughters of mine on condition that thou hirest thyself to me for (the term of) eight pilgrimages. Then if thou completest ten it will be of thine own accord, for I would not make it hard for thee. God willing, thou wilt find me of the righteous.

He said: That (is settled) between thee and me. Whichever of the two terms I fulfil, there will be no injustice to me, and God is Surety over what we say.

And when he reached it, he was called from the right side of the valley in the blessed field, from the tree: O Moses! Lo! I, even I, am God, the Lord of the Worlds;

Throw down thy staff. And when he saw it writhing as it had been a demon, he turned to flee headlong, (and it was said unto him): O Moses! Draw nigh and fear not. Lo! thou art of those who are secure.

Thrust thy hand into the bosom of thy robe it will come forth white without hurt. And guard thy heart from fear. Then these shall be two proofs from your Lord unto Pharaoh and his chiefs. Lo! they are evil-living folk.

He said: My Lord! Lo! I killed a man among them and I fear that they will kill me.

My brother Aaron is more eloquent than me in speech. Therefore send him with me as a helper to confirm me. Lo! I fear that they will give the lie to me.

He said: We will strengthen thine arm with thy brother, and We will give unto you both power so that they cannot reach you for Our portents. Ye twain, and those who follow you, will be the winners.